The Story Behind the Story…
​Karen Leggett Abouraya and Susan L. Roth met as members of the Children's Book Guild of Washington, D.C.When Susan was planning a trip to Egypt in 2009, Karen insisted that the Library of Alexandria be on the itinerary.Susan, her husband and daughter agreed, with some reluctance about leaving the majestic treasures of Cairo even one day early.
"But when we walked inside the door," said Susan, "and crossed over to the first balcony for the first glimpse of the extraordinary, dazzling space, I stood in awe for the first five minutes. The Alexandria Library did not disappoint." 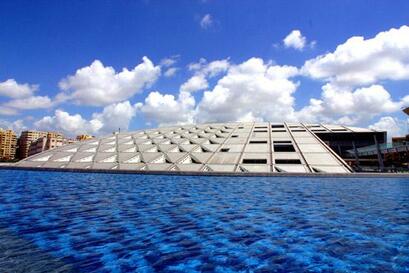 Carrying the Legacy Forward: Skyping Across the Sea
Karen and Susan wanted to tell the story of the magnificent ancient Library of Alexandria as well as the new Bibliotheca Alexandrina. But they also wanted to celebrate what both libraries represented. Mohsen Zahran,  Bibliotheca Alexandrina's former project manager, said, "We are reviving the idea of the pursuit of knowledge that thrived in the ancient library. The old library encouraged the public to debate, create and invent. The new library is carrying that legacy forward."
He explained that the design of the new library symbolizes the rising sun, expressing universality, and also has the appearance of a microchip - looking both futuristic and timeless.

​Before they ever wrote a word or created a collage, Karen and Susan organized Skype conversations to carry the legacy forward with modern-day fourth graders in Alexandria, Egypt; Burgundy Farm Country Day School in Alexandria, Virginia; and Forest Knolls Elementary School in Silver Spring, Maryland.It was nine o'clock in the morning in the United States; it was four o'clock in the afternoon in Egypt.

​The boys and girls were 6,000 miles and seven hours apart, but they used the Internet to learn more about each other. The Egyptian children had all been learning English in school and spoke it very well, so everyone spoke into the small computer microphone in English. The children had so many questions for each other – just like the scholars who studied at the ancient library.
What sports do you play? Soccer, tennis, squash, basketball
What is your favorite subject in school? Science. A boy in Egypt experiments with chemistry and magnets. The Silver Spring class raised 200 fish in an aquarium and released them in a creek near the school. Cool.
(America) What kind of clothes do you wear? (Egypt) Jeans and t-shirts.
What's your favorite food? Pizza and more pizza. But they also learned about favorite foods that were special to their own families, like kosheri (macaroni, rice, lentils in a spicy tomato sauce) in Egypt and in Maryland, beans and tortillas for a boy whose family comes from Nicaragua.
The children also discovered they liked many of the same singers, the same TV shows, even the same professional wrestlers.In Egypt, one girl wants to be a fashion designer, another a doctor, another an electrical engineer. In the United States - soccer player, robotic engineer, video game designer, archaeologist (someone who studies spiders).
And so the writing and collage-making began…
Before Susan and Karen could complete their book, the Arab spring erupted, first in Tunisia and then in Egypt. When the protests spread to Alexandria, Egypt, young people held hands around the Bibliotheca Alexandrina to protect it from vandals. News reports shared the story and those amazing moments became the centerpiece of Hands Around the Library: Protecting Egypt's Treasured Books.
​
Whether you are a student, librarian, teacher or wandering visitor, there are ways on these pages for you to carry the legacy forward and support the spread of knowledge.